Stupidest Thing in the Room, The

Years ago while sharing a New York City apartment with two opera tenors (true story), I got in a very courteous habit of not shaking people’s hands when I either didn’t feel well, or for a significant time after my body had worked through a cold. 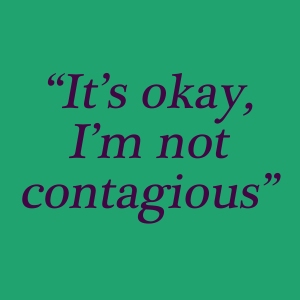 For most people being sick is a bummer, it knocks them down for a few days, they may take a paid sick day, lose a day of pay, or have to slug through their daily tasks regardless of how they feel… But when a singer/voice artist gets a cold that affects their voice even slightly it can knock them out of being able to perform a concern, or keep them from landing a paid jobs, and one paid job could be the difference between homelessness & unemployment and paying their rent & health care insurance. Same with actors, when we look sick, sound sick, or feel blah, that might be the difference between getting a commercial or maybe even that one big break… Dancers. Athletes. Hell, regardless of what people do, everyone is effected by the flu, viruses and bacteria, and NOBODY (save a lunatic) likes getting sick.

The other day I met some new people and while most people appreciated the gesture of me not shaking their hands, one person took a little offense to it. “It okay,” he explained with a bold air of indignancy and his hand extended, “I’m just getting over a cold too.”

I actually laughed ever so slightly, as I couldn’t actually believe what I was hearing… So, not only was he willing to risk his own health, but he was willing to risk mine. Yeah, I know, it’s not that dramatic to have a runny nose, pounding headache, upset stomach, or cough, but yet, as I explained in the first paragraph, NOBODY likes getting sick.

I’m not a “germaphobe” by any means, but there have been many articles that state that people with colds are more than likely contagious a few days BEFORE symptoms kick in and possibly for several days after the body appears finished with it. There are all sorts of bugs, and these pesky don’t follow many rules…

Ever hear someone declare, “It’s okay, I’m not contagious,” as if they’re taking saliva swabs and smearing them in Petri dishes on an hourly basis… As if there is only one virus or bacteria in the world and that they may not have picked up another…

“Don’t worry, it’s the same cold you had…” Really? How do you know?

“I’ve been on antibiotics for three days, so you’re fine…” Really? But what if that particular antibiotic isn’t hitting the very specific particular bug you have, and you won’t know for another three days when you’re back in the doctor’s office?

So you know, I’m not a doctor, or a scientist working in a lab, and I’ve rarely been cast as either one TV, though for the record I have worked in labs, physician offices, and within the field of pharmaceuticals, as well as studied biology, microbiology, histopathology and chemistry.

With all that irrelevant ego-driven-bullshit written, here’s my feeling, which again I learned from two opera singers in New York City… If you’re starting to feel sick, exhibiting signs of sickness, or recently getting over the simplest of colds… You’re doing everyone a favor (except pharmaceutical companies) by not shaking their hands even if it feels impolite not to.

The smarter people you come in contact with will appreciate the gesture, and nothing is worse than shaking someone’s hand and then hearing them say, “Oh, I’ve been better, I got this stupid cold.” Trust me, at that moment, the cold isn’t the stupidest thing in the room.

Do you have a “I’m not sick”or “Don’t worry I’m not contagious” story to share below?