That’s A Lot Of Pizzas 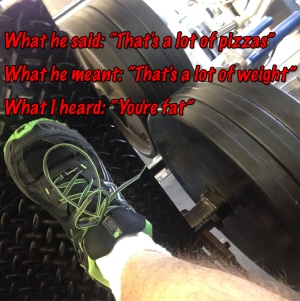 “Heavy day” at the gym this AM.

I was on the leg press machine with fourteen 45-pound plates on the sled. Knocking out low rep sets, feeling good about recent workouts and my current food program, when a guy who has always been pleasant with a “hello,” leans over and says…

Now, with a history of strangers saying really crappy things to me about my various weight and shape over the years, I stopped what I was doing and sternly asked…

He repeated himself, but this time indicated the seven large round pizza-sized plates on each side…

It was then that I realized what he meant. I smiled, made light of the heavy weight, with some self-depricating humor, and life went on…

What he said: “That’s a lot of pizzas”

What he meant: “That’s a lot of weight”

After I was done with that particular set of exercise, I was still feeling a little stupid for jumping to the wrong conclusion on what he said, so I found him and took the time to apologize…

“I’m sorry, I have a history of people making fun of my weight or touching my stomach and asking when the baby is due, so when I heard “That’s a lot of pizzas” I thought you were talking about my stomach or my weight.”

He was more than apologetic, but before he could feel bad about it, I explained, that it wasn’t his choice of words, or his intention… It was my broken brain and ill-trained ears, that it was my responsibility for fixing both of them.

“It was just the opposite. I was saying how strong you were. I see you in here working your ass off all the time.”

Turns out he’s a really good dude, apparently himself dealing with the constant battle, dropping 38 pounds in the past six months. Man, it’s so important to not jump to conclusions, to realize that as humans we color other people’s words with our own history and experience.

After we chatted for short time we properly introduced ourselves, and he promised that the next time he sees me busting out a lot of weight he’ll say…

Do you have a story to share below, where your ears heard something completely different from what someone meant? Or you said something that someone took 180-degrees the wrong way?

“I be up in the gym just working on my fitness. He’s my witness”
– Fergie